There is Only
​One Race:
The Human Race.​ (Rosa Parks)

Founded in 2017 in Denver, Colorado by Al Harrell and Angie Arkin, the Symposium on Race strives to create a safe space for open discussion about issues of race in today's society.  Since its inception our members have facilitated discussions on such topics as intersectionality, race in education, implicit bias, the Sand Creek Massacre, and Interrogating whiteness. We have also had presentations by Arthur McFarlane, great-grandson of W.E.B. DuBois, Kenzo Kawanabe on "The Rise of Anti-Asian American Hate Incidents, and What You Can Do to Help Stop Them.” and Qusair Mohamedbhai on "Boogeyman: Islamophobia in the Age of Trump.”

Thanks so much to Tamara S. Rhone for the terrific discussion "Reparations: The Time Is Now."
Our next Symposium on Race is on July 6, 2022, from 6pm to 7:30pm via Zoom.
MJ (Maleeka Jihad)  will discuss "Racism within The Family Regulation System (Child Welfare / Child Protective Services)."
This presentation will include three components:
1. Information
2. Conversation
3. Call to Action
PLEASE JOIN US FOR THIS IMPORTANT DISCUSSION!!!!
More about our engaging speaker:
​MJ (Maleeka Jihad) is the Director of the MJ Consulting Firm and the nonprofit MJCF: Coalition, an Agency focused on dismantling systemic racism in the family regulation (child welfare) system through education, advocacy, and policy reform. She is the CEO and Co-creator of EC3 (Emic Cultural Consultants Collective), where she specializes in organizational and individual transformational work with structural racism education and community healing.
As an adjunct faculty member at the Graduate School of Social Work with the University of Denver, she teaches race, privilege, social justice, therapy, leadership, and child and family law courses. Alongside her students, MJ is continuing her education by obtaining a  PhD in Organizational Development and Change specializing in Social Justice (at Fielding Graduate School) with a foundation of International Psychology courses from the Chicago School of Professional Psychology. 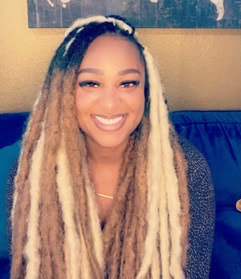 Composed of member contributions, this list highlights an important moment for our global society as well as the powerful role business schools play in shaping understanding.
...We hope you are inspired by the list, presented below alphabetically, and find a couple new items to add to your media library.